“His Majesty, the Devil – a play with music”

Most recently Colin has performed the role of the Young Man in His Majesty, the Devil – a play with music by Alexandra Devon (inspired by Dostoyevsky). He acted this role opposite his father, MacIntyre Dixon, in 2013 at 59E59 Theaters in New York City and at the Edinburgh Fringe Festival in Scotland and in 2014 at the International Fringe Festival in NYC at the Robert Moss Theater. 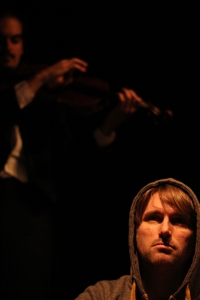 “His Majesty, the Devil – a play with music” photo by Rodney Damon II

In France, he was one of 7 actors in the theater company Théâtre de l’Arc-en-Ciel who co-wrote and co-directed the ensemble piece La Première Seconde which they performed in Paris at L’Espace Kiron. For many years he performed Etty Hillesum in Paris (Théâtre de l’Atlélier), Lyon, Brussels, Avignon Festival, Montreal, Quebec City, etc. in which he was onstage as a violinist and actor. For several years he also was featured in the circus production “Dancing Color Box” performed on a barge on the river Seine in Paris, as well as in Turin Italy. As a violinist onstage in the theater he was in The Cherry Orchard at the Trianon Theater in Paris, Primo Levi, Cyrano de Bergerac, among others.

Other roles in the past have included George in Our Town and Rapunzel’s Prince in Into the Woods. He worked shortly as a professional child actor, making brief appearances in the films Popeye (Robert Altman) and Paternity (Burt Reynolds).