Having grown up around the theater with actor parents, his work as a musician joins and combines with his love of theater and writing. He began his  music  studies at the Mannes College of Music Prep. Division (New York City). attended the High School of Music & Art/Performing Arts and did a BA in music at Haverford College in PA. He was then invited on full scholarship as a musician-scholar at the European Mozart Academy in Poland and eventually moved to Paris to continue studying the violin. His main violin teachers have been Barbara Karakauer, Carol Stein Amado, and Patricia Reibaud. 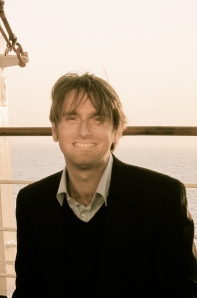 Most recently he co-produced His Majesty, the Devil – a play with music. He acted, composed and played the music for this unique piece which was performed in New York at 59E59 Theaters and at the Edinburgh Fringhe Festival in Scotland (2013).

Some of his compositions include: Inovcation, for soprano, violin & viola, Suite Khamush, for voice, violin and cello based on the poetry of Rumi (co-composed with Eveline Causse and performed in Paris, Lyon, Saintes, Belgium, etc); music for the theater piece Etty Hillesum (co-composed with Eveline Causse and performed in Paris, Avignon, Brussels, Geneva, Montreal, QuebecCity, etc.); “I have a Dream” for soprano and string trio; original music for the play The Tolstoy Diaries (Sarasota Fl, Paris, Lyon, Brussels). Pieces for chamber music with narrator include Chekhov Triptych (Paris, New York, Boston), The Happy Prince (Paris, New York) and The Velveteen Rabbit (chamber & orchestral version) (Paris, London). His compositions have received grants from the French institutions SACEM & SPEDIDAM.

He has performed in various chamber music groups and orchestras in France and other European countries, including a memorable chamber concert in Yerevan, Armenia (2007), and has taught violin in France’s National Conservatories in Reims and Versailles, among others. In 2010 he was honored to be invited to play at Les Invalides, Paris for the 100th anniversary of Leo Tolstoy’s death.

As an actor: La Premiere Seconde (Paris, Lyon), Etty Hillesum (France, Belgium, Quebec, etc), Our Town (George), Into the Woods, etc. as well as appearances as  a child in the films: Popeye (Robert Altman), and Paternity (Burt Reynolds).

In 2012 he created the performance group: The Elsewhere Ensemble – an intercultural, interdisciplinary, music-based performing arts group.

As a certified Feldenkrais Practitioner he gives workshops to other professional musicians.

In 2006 his book of short stories entitled “…in God’s Flower Garden” was published in the U.S. by Pocol Press.